Wooden built fishing vessel built at Frederiksund in Denmark
24.09.1948: Arrived at Fleetwood carrying the body of Hans George Petersen, the Danish mate and part owner of the vessel who had been dragged over the side by the trawl and drowned. Sk. Peter Kristensen stopped engine and hauled immediately and found the mate tangled in the warp. He immediately attempted artificial respiration but to no avail.
1970s: in ownership of Edmund P. Kristensen, Fleetwood
05.05.1977: Sank 15 miles east of Ramsey 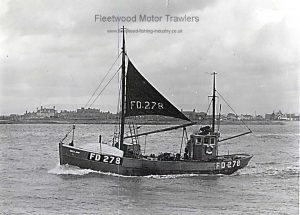