The motor fishing vessel PYGMALION was trawling to the east of the Point of Ayre on the 26th of may 1964. Her skipper was Richard Billington Sumner Around 8:30 am the Calor gas stove exploded as the three man crew was having breakfast, knocking one man unconscious and injuring two others as fire quickly engulfed the vessel.
The crew launched the self-inflating liferaft but it didn’t inflate properly.The badly injured crewman was lowered into it by the other two as the Pygmalion sank, some 9 miles east of the Point of Ayre. It was a sunny day and distress rockets would have been of no use so a decision was made to wait until darkness before using them. To make matters worse a coal strike had reduced traffic to and from Whitehaven so no other vessel passed them.

They drifted for fourteen hours all the time within sight of the Isle of Man, but with no sign of rescue. The injured man, John Cowell, was in considerable pain and only an emergency injection of morphine eased his pain,
By 22:30 it had grown dark enough to use the flares and these were fired. The Whitehaven trawler LORRAINE
was outbound for the fishing grounds and she spotted the distress rockets and changed course towards the liferaft. Meanwhile the Ramsey lifeboat, ANNIE ROWLAND ISABELLA FORREST, was launched.
LORRAINE, under the command of Peter Haroldson, reached the liferaft, took the three crewmen aboard and set his course for Ramsey where an ambulance was waiting.

The crew of PYGMALION were:
Richard Billington Sumner, skipper
Les Patterson, deckhand
John Cowell, deckhand
All were from Fleetwood 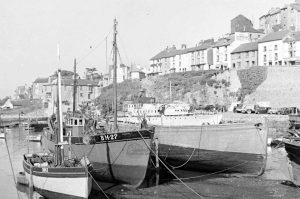