Many Fleetwood fishermen will remember this vessel several were built along the same hull design, NORTHFLEET and AILSEA are two that comes to mind.
Built by Nobles, larch on oak of very traditional lines, the NORTHFLEET had an after cabin, the others a foc’sle cabin. Engines were 72hp Gardener L3.
MDB worked from Fleetwood for many years owned by the Bond family before they moved to New Zealand.

The boat then had a couple of owners before, being bought by Peter Canipa as shore owner of Douglas IOM.

MDB worked from Ramsey for several years with an ex Fleetwood skipper Mr Evans. Dick Massey took over the boat as skipper, working the vessel in several fisheries the most successful being trawling for queenies.

Several good trips were made long lining for large dog fish. With a full fish room of over 100 kits , these were landed at Fleetwood with lumpers doing the unloading, the only variations to the dogs were a few congers.

The owner had visions of making the MDB in to a modern fishing vessel,
Bill Charnick and Charles Massey, aged 15, took the boat south to Gillingham on the River Medway, here at the local boat yard modernisation took place.
With the hull stripped to a shell, with seventy thousand pounds spent the vessel looked like brand new and she almost was. 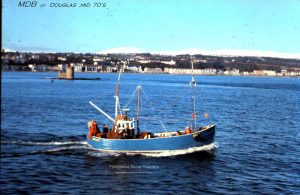