Length: 60 ft
Breadth: 18 ft
Depth: 6′ 6″
Built Holland 1966, Steel Construction fully welded.
Main Engine: 3 cylinder ABC Built in Belgium 250 Hp @ 300 RPM
Gearbox with a 2/1 Reduction
Aux motor, 25hp Samofa ( Dutch Lister )
Built with what was called a Clipper Bow, this shape had a huge flare to throw the seas away, with a very full body to the amidships section.
The stern was large, full and rounded. Bulwarks forward being 6 ft high tapering down to 3 ft amidships with the same height around the stern.

Wheel house and Galley was aft with engine room and a 6 bunk cabin below, and the winch was forward of the wheel house being a large 4 drum belt driven from the main engine,
The boat was rigged for multi purpose fishing, such as beam and otter board trawling. Also on board were pair trawls for both white fish and industrial sprat fishing.

November 1970 STELLE was sold to Dick Massey of the Isle of Man.
Departing Stellendam Holland bound for Peel, being winter time, gale force winds were encountered The first bad westerly gale in the English Channel had us sheltering in Dieppe fishing boat harbour for several days, then a call at Newlyn for bunkers and customs and, with a good weather forecast, we departed Newlyn.
Halfway between Lands End and the Tuskar, ( Southern Ireland ) the forecast was changed to north west gales to severe gales imminent, so we’d not much choice but to keep going towards the Tuskar.

When dawn arrived the sea was a mass of blown foam, as the shelter of the Irish coastline came abeam, the seas calmed, the gale force winds still shook the boat like a rag doll. By early afternoon we were tied up along side in Dun Laoghaire, with the gale starting to ease,
With a full night in our bunks we were ready for the calmer passage over to Peel. Our Arrival made a stir in Peel, as unknown to us the Customs were aware that we had made a stop over in Southern Ireland, so we were boarded by the customs service black gang, to search the boat. “The Troubles”
were full on at this time, so with nothing to find we received our ships clearance.

Soon we had the import duty paid, new beam trawls ready to collect
From Boris nets in Fleetwood, John Halsall of Douglas as deck hand we departed the Island for Fleetwood soon enough with Reggie Hull as mate and another Fleetwood man we soon had the new warps on the winch and the nets from Boris nets rigged,

The name was Changed to STELLE VERTROUWEN, and registered at Ramsey IOM as RY14, now we were ready to go fishing.
This boat was to prove herself many time with excellent catching ability, with high daily earnings, the vessel was a very safe boat in bad weather and big seas,
we had sold our first VERTROUWEN RY67 to the Bond Family, who now were ready to upgrade and STELLE VERTROUWEN suited them nicely.

The VERTROUWEN ex RY67 was sold to new owners at Burnham in South East England and the Bond family took over the STELLE VERTROUWEN, changed the name to MDBB and re registered it at Fleetwood.
The boat was worked in various fisheries so it was decided to install an engine of larger horse power.

Volvo was their choice of engine, the new installation took months to complete. Meanwhile the family were having a much larger trawler built.
With the vessel back to sea and working well a buyer from the east coast of Scotland bought the MDBB, were she was rigged as a board trawler and underwent another name change. 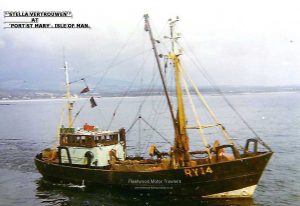