1956: To Fleetwood as a new vessel.
Undated: Transferred to Pegasus Trawling, Lowestoft as LT432
06.02.1965: Sailed from Lowestoft for the Horn Reef area under the command of skipper Brian Moyse with a crew of nine hands all told. She commenced fishing at Horn Reef the next day in the company of two other trawlers the BOSTON WIDGEON and the ROY STEVENS.
12.02.1965: With the weather freshening and winds forecast up to force 10 all three skippers decided to move westward to be closer to the land. At about 19:30 hours the BOSTON PIONAIR was seen hauling her gear and heading off in a WSW direction. That was the last time she was seen. For the next two days the weather was very bad with very high seas.
13.02.1965: Weather estimated to be force 10 +. BOSTON WIDGEON reported that she had been forced to heave to. At 0630 contacted BOSTON PIONAIR. Skipper Moyse advised that they had been laying to but thought he would soon have to start dodging again.
16.02.1965: After failure to contact BOSTON PIONAIR over the past two days a full scale search was started, including two naval vessels, a shackleton aircraft and over sixty trawlers. Articles belonging to BOSTON PIONAIR was found over 130 miles WSW of the position she was last seen.
02.12.1965: Formal BOT investigation at Lowestoft concluded “….that the BOSTON PIONAIR was overwhelmed in severe weather conditions by a wave or succession of waves which caused her to roll with such severity that her righting lever was extinguished and that she had thereby lost her ability to right herself. The possibility of damage to the hull or superstructure cannot be excluded.
All the crew were lost.
Crew Lost
B Moyse (JNR) – Skipper
G Beamish – Mate
M Lark – Bosun
A Thurston – Chief Engineer
W Thurston – 2nd Engineer
J Genery – Deckhand
W Stebbings – Deckhand
M Lee – Deckhand
B Moyse – Deckhand 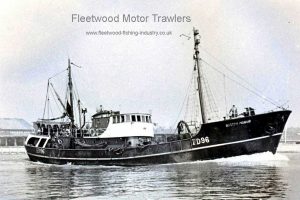