1958: Built for William Liston Ltd, Newhaven as SUMMER ISLE LH69
1973: Renamed FERN BF205, Owners Gilbert Watt, Gardenstown & George Wood, Macduff.
1996: Ceased fishing and sold to David Normandale of Scarborough. David planned to emigrate to New Zealand and this he did after a refit was carried out on the vessel. His vessel and three crew went with him. He left Scarborough on the 14th November 1996.
3rd February 1997: Arrived in Whangarei, New Zealand. David Normandale planned to use the FERN for long line fishing. Unfortunately his plans did not work out and she was sold to owners in the Solomon Islands who also planned to use her for long lining. Again this never happend and she ended up working as a cargo vessel.
FERN was later re-possessed due to non payment from the owners he sold the vessel to. She was laid up in Tauranga before being sold on to Terry Smith of Tauranga who planned to use her for fishing Tuna.
As of 2010 the FERN is still fishing for Tuna. 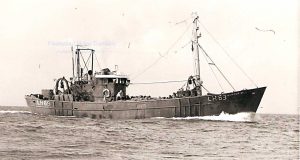