Sometime in the 1970’s Egon Thomsen brought ARCONA BAY to Fleetwood from Denmark.
1995: Decommissioned and dry landed on Fleetwood Freeport as an attraction.
Undated: Removed from Fleetwood Freeport. No record of what has happened to her since.

Countless thousands of visitors to Fleetwood’s Freeport Shopping complex, on the edge of Wyre Dock, have walked past Arcona Bay. How many of them would have spared a thought for the vessel and what she represented to those that once owned and worked her?

To most people she would be just another exhibit amongst the many that are on show there. To Egon Thomsen and his son Steven, however, she was much more than that, she was their livelihood.
Egon Thomsen bought ARCONA BAY, in the early part of the 1970s, in Denmark, bringing her to the UK. Steven is of the opinion that she was used as a shark fishing boat as a supply of large hooks was found aboard. Utilized as a seine netter until the early 80s Egon Thomsen worked the Norwegian sector, venturing as far afield as the Shetland Isles. This involved a 400 mile, 3 day steam there, and the same back to the Humber. Steven recalls one trip in particular when they landed 30 x 10st kits for a 30 day trip. He picked up 15 pence that trip and then only because he received a tax rebate.

They did, however, have more rewarding trips from the same grounds. They broke the port record on more than one occasion by landing 350 kit for 10 days. Occasionally fuel would run low and they would have to anchor and wait for another seiner to come past so that they could borrow enough fuel to make the Humber.

Egon Thomsen was a big man of some 19 stone. When he had ARCONA BAY refitted, the wheelhouse was tailored to his frame and was made from fibreglass by Ernie Leggett, a Grimsby shipwright. During the refit she was fitted with a new Gardner engine and the wooden mast was replaced by an aluminium one. As they un-stepped the old mast coins, an old seafaring tradition to bring luck, were found underneath. At a later date the cabin and galley were refurbished

ARCONA BAY is fondly remembered as a very good sea ship that carried her crew through some fierce storms, “She had to be” states Steven, “my dad used to fish through most of them. I shed quite a few tears and blood on that ship over the years but I have some good memories too.

It could be in the middle of winter and we would be on deck, wet and freezing and look up at the wheelhouse where the windows would be steamed up. My dad would open one of the windows and shout “Never mind son, the first 20 years are the worst” and quickly shut the window again.”

Steven remembers sleeping in a starboard bunk. Hove to in bad weather he was just climbing into it when ARCONA BAY dropped off into a short sea and heeled over to port. Steven was thrown across the cabin and landed backside first onto the newly fitted oil stove. His crewmates were of the opinion that his scream of pain could have been heard in Lowestoft, some 300 miles off.

“Sometimes we would fish through the night and have our evening meal in the morning but that only happened when we fished the Shetlands” Steven recalls, “In fact, I can’t remember any other Grimsby boat fishing up there since the war and I have never been up there with any other skipper. It made local headlines the first time that we went.”

Egon took pride in the appearance of his vessel and the crew were kept constantly busy cleaning and painting her. 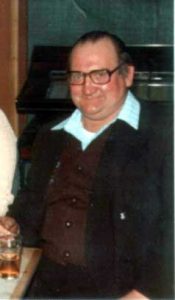 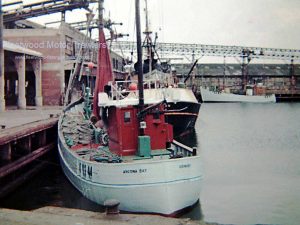 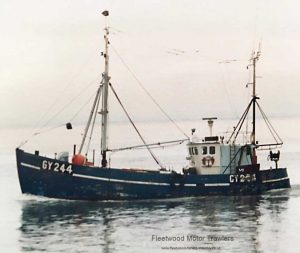 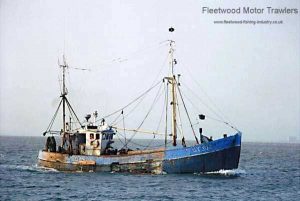 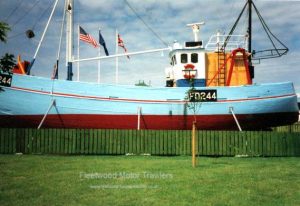