3.1959: Launched by George Thompson & Son Ltd, Buckie for Frank Pitts, Kirkella & others as STAR OF FREEDOM.
1959: Completed. Registered at Hull (H131).
By 1964: Owned by John Davies & Clifford Davies, Fleetwood. Hull registry closed Registered at Fleetwood (FD215).
08.1967: On a trip to the Southern Minches (Sk. Harold Harrison). Landed 500 st. fish and anchored for a few hours rest. 06:40 restarted fishing and crew were on deck shooting when they smelled smoke. Flames coming from cabin. Automatic extinguishers were switched on in the engine room but these did not cover the cabin. Engineer Woodward Millington attempted to get to the cabin but was unable to do so. Crew abandoned and fuel tanks exploded. It was the second occasion that a cabin fire had occurred on the vessel. Castlebay lifeboat rescued the crew. 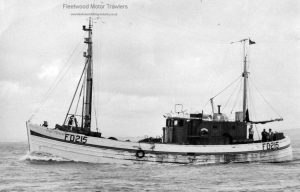