1959: Completed by Cook, Welton & Gemmell, Beverley (Yd. No. 950) as WYRE CONQUEROR for Wyre Trawlers Ltd, Fleetwood. Registered at Fleetwood (FD187).
18.01.1966: In a heavy snowstorm and with a faulty radar (Sk. J. Mecklenburgh) grounded at Mýrdalsansd on the South Coast of Iceland. Crew rescued by breeches buoy by the Icelandic Lifesaving Association.
22.01.1966: Crew flown back to UK.
23.01.1966: Refloated by the gunboat Odin and taken to Reykjavik and found to be undamaged.
1974: On an Icelandic trip. Sailed for 15 minutes through shipping lanes with the wheel unattended. Skipper locked in cabin by a crewman who then threw the keys overboard. Bosun attempted to pick the lock with a screwdriver but failed. Resorted to smashing the door in, injuring the skipper. Two crew later charged at Magistrates court with stealing the keys. The incident was put down to alcohol.
07.04.1978: Transferred to Aberdeen (all Wyre trawlers transferred by BUT)
1979: Sold for scrap to J Gibson Johnston Ltd, Hull.
1979: Re-sold to H Kitson Vickers & Sons Engineering Ltd then re-sold to S Dalton Skip Hire Ltd.
12.1979: arrived Bo’ness for breaking. 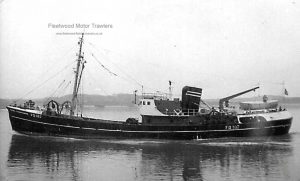 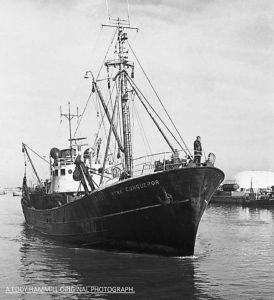 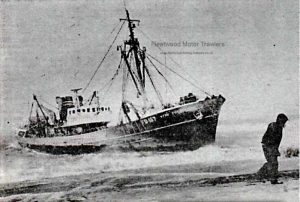 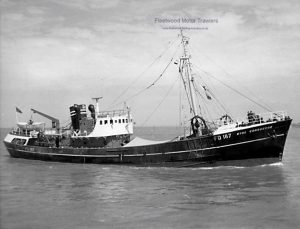