1955: Built by Mashford’s (CREMYLL SHIP YARD) Cremyll,Torpoint, Cornwall
1955: Keel laid.
1956: Registered at Plymouth (PH5).
1964 moved to Fleetwood
1967 under tow to Glasson when the tow parted and she was wrecked on Pilling Sands. Vessel broken up on Knott End beach.

Notes from Melvyn Lloyd.
The 70ft Hamoaze PH5 was the first trawler to be built in Plymouth after WW2.
Her principal owner and Skipper was Archie Jennings (who was my Uncle) his mate and partner was his son-in-law Jack Forster.
My father and I went on her first sea trial and me being only 13 yrs old it made a great impression on me.
Hamoaze was equipped with a fish sonar and Archie took great pains in explaining to me how it worked
and gave me some of the print-offs to take home.
I also recall that Archie was not enamoured by the builders who had concreted in the ballast, other than that he was pleased with the vessel.
Previous to moving back to Plymouth Archie skippered trawlers out of Milford Avon throughout the war and after on 14 day trips. His hobby was embroidery, I presume that this was a take-on from mending nets. 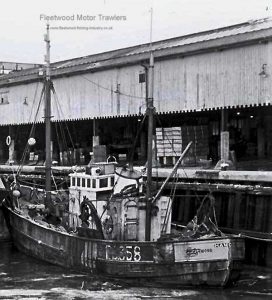