05.12.1975: Launched Beverley Shipbuilding & Engineering Co Ltd, Beverley (Yd.No.1564) for J. Marr & Son Ltd, Fleetwood as NAVENA.
5.05.1976: Completed.
02.07.1976: Registered at Fleetwood (FD323).
07.1982: All of the company’s remaining Fleetwood based trawlers (8) transferred to fish out of Hull.
01.1984: Landed at Aberdeen. Struck quay on sailing for Hull (Sk. Jeffrey Sumner); eleven crew.
26.01.1984: In severe weather off Flamborough Head started to take in water forward and developed a starboard list due to flooding of factory deck. Fearing that the trawler would capsize a distress call was sent and crew look to liferafts but skipper remained onboard to direct the rescue. Liferaft capsized and all crew picked up from the water by RAF helicopter. Sk. Sumner later picked up by helicopter. Hull tug YORKSHIREMAN (686gt/1978) engaged to take trawler in tow but in the meantime three Scarborough fishing vessels connected claiming salvage and CASSAMANDA (SH128) (49grt) commenced tow to Scarborough.
27.01.1984: Having been refused entry to harbour and directed to beach the vessel, put ashore south of the harbour and later capsized. Abandoned to the underwriters and United Towing Ltd, Hull engaged to refloat. Attended by salvage ship RECOVERY (484grt/1942), leak in engineroom sealed and loose gear removed.
03.1984: On spring tide failed to refloat and United withdrew following expiry of fixed term contract. Humber Diving Co, Hull engaged to refloat.
24/25.03.1984: Again failed to refloat on spring tide. Vessel now on her beam ends on beach.
04.1984: Sold by the underwriters to Rayner Shipping Ltd, Bradford.
Late 04.1984: Scarborough Council took possession of the wreck i.a.w. Merchant Shipping Act 1894. Hopper dredger SKARTHI (112grt/1952) beached alongside. Salvage company Neptun Salvage & Marine G.m.b.H, Hamburg engaged to refloat and deliver Middlesbrough.
23.05.1984: Fleetwood registry closed “Total Loss”.
25.05.1984: Salved by floating sheerlegs HEBELIFT 3 (3528grt/1976).
27.05.1984: Sailed Scarborough for Tees suspended from sheerlegs towed by tug ERLAND (309grt/1974). Slipped by Marine Partners Ltd, Middlesbrough for survey. Declared a Constructive Total Loss, unslipped and beached.
1984: Sold to Cherry Marine Ltd, Middlesbrough.
1985: Sold to S & S Sunderland Marine Ltd, Sunderland for possible repair.
07.03.1985: Refloated by tug CHERRY (62grt/1963).
18.03.1985: Sailed Tees for Sunderland in tow of tug CHERRY. At Sunderland docked to assess work involved in rebuild. Work commenced on machinery and removal of damaged steelwork.
Late 1985: Re-assessed. As vessel no longer registered, repairs would have to be in accordance with latest rules and specifications; project considered to be uneconomical. Laid up in South Docks.
05.1991: In process of being broken up at Sunderland.
Notes
Crew members from Fleetwood and Poulton who where aboard Navena when she was stranded at Scarborough.

The three skippers were working in the approximate vicinity of NAVENA when the crew abandoned ship and the three took her skipper off before taking her in tow. The saga turned sour at the entrance to the port when the harbour master told them not to bring her into the harbour as intended. Instead he told them to beach her being mindful that she could have sunk in the harbour mouth.
In giving this instruction he cost the would be salvors about £300k each but the decision also put the onus onto the local authority thus costing the ratepayer £150k to get her lifted off by the giant shearlegs from Holland, after several failed attempts using other methods. There was no loss of life and something that is generally overlooked, but the crew were glad to be off her as they had to be picked from the sea after the liferaft capsized. 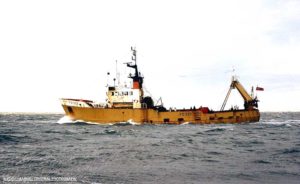 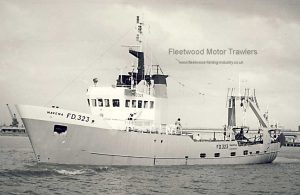 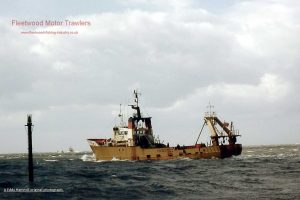 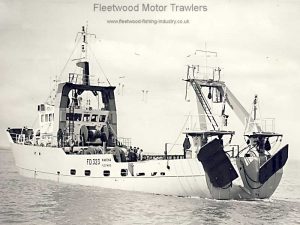 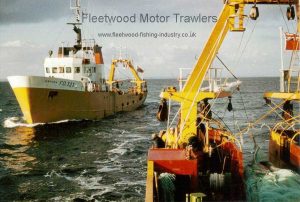 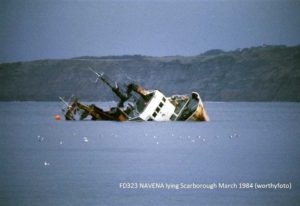 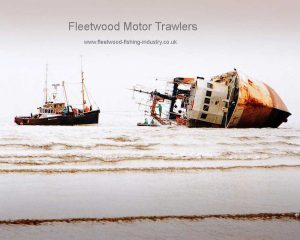 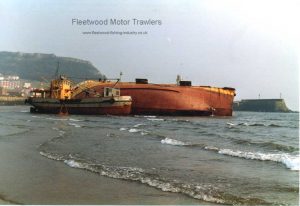 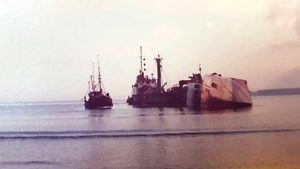 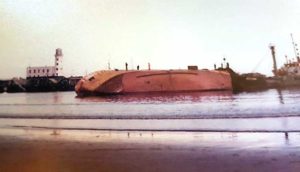 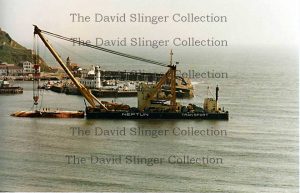 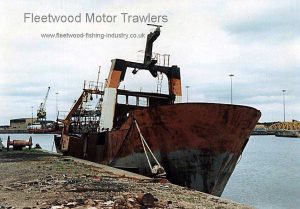 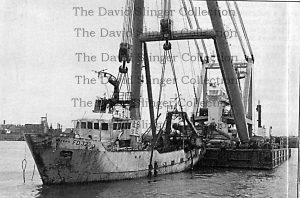