19.09.1951: Launched by Cook, Welton & Gemmell Ltd, Beverley (Yd.No.855) for J. Marr & Son Ltd, Fleetwood as IRVANA.
16.01.1953: Completed at a cost of £81,609.
01.1953: Registered at Fleetwood (FD152). Geoffrey Edwards Marr, Brough appointed manager (Mark Stanley Hamer, Fleetwood manager).
1959: Taken in hand by Humber St. Andrew’s Engineering Co Ltd, Hull for lengthening.
14.01.1960: Vessel registered anew in consequence of material alterations (FD152).
22.04.1961: At Fleetwood, having left lock for fishing grounds (Sk. E. Harris) grounded on Tiger’s Tail. In backing off in collision with trawler FLEETWOOD LADY (FD1) (Sk. Ken Beavers) which was following astern. No damage sustained and proceeded to sea.
23.03.1964: At 0930 sailed Fleetwood for west of Iceland grounds (Sk. Charles Louis Scott); seventeen hands all told. There was a southerly breeze with rain and drizzle though visibility was adequate. At some time Sk. Scott decided to make for Cushendun Bay, Co. Antrim, ostensibly to enable the crew to rig the gear as he believed the weather forecast would not enable them to do this safely on passage to Iceland. The skipper had been into Cushendun Bay on four previous occasions but never in darkness. This part of the Antrim coast is remarkably devoid of aids to navigation and the skipper attempted to find a safe anchorage using only radar and some shore lights; no attempt was made to use the two echo-sounders or hand lines. In consequence when ordering the anchor to be dropped Sk. Scott had no idea of how much water there was under the vessel nor did he take into account the direction and force of the tide. The skipper then retired to his cabin without ascertaining whether or not the anchor was holding. At 2150 the vessel struck rocks with her after end on the port side, engine was worked but propeller stripped and engine stopped. The vessel was held fast at the northern end of Cushendun Bay in position 55.8,12N 06.01,54W. Although the vessel was not making water, the order to abandon was given and all the crew safely reached the shore in the inflatable life-rafts.
25.04.1964: Refloated and towed to Port Glasgow for slipping and survey.
05.1964: Following survey declared beyond economical repair and sold to Shipbreaking Industries Ltd, Glasgow for breaking up at Faslane.
10.06.1964: Arrived Faslane from Port Glasgow in tow.
06.1964: Fleetwood registry closed.
18.11.1964: At the Formal Investigation (No.S.470) held at Fleetwood, the Court found that the stranding and consequent damage to IRVANA were caused by the wrongful act or default of Charles Louis Scott, her Skipper, in attempting to bring her to anchor in Cushendun Bay in darkness without taking the necessary steps to ascertain his position or the strength of the natural forces affecting the navigation of the vessel and suspended his Full Certificate of Competency for a period of 24 calendar months from 23rd day of March, 1964. Sk. Scott was ordered to pay £250 towards the cost of the Inquiry. 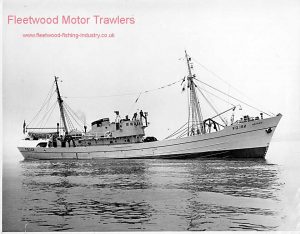 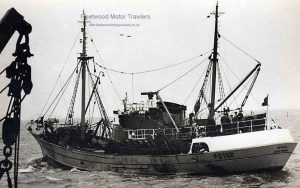 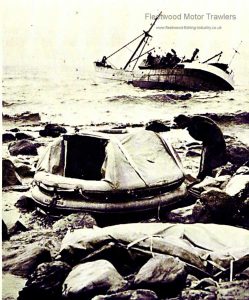