Note: Skipper Basil Bowler “We were fishing Dogger Bank when the watch called me out at 3am and said the chief engineer wanted me to haul as both auxiliary engines had broken down and would could not pump the air bottles up. We also had no lights.
Started to haul in the dark with main engine stopped. There was a light wind but conditions were a bit foggy .
The mate, Brian Salter, called out that we had a lot weight and was hooking the big jilson. I went out on bridge veranda to try and see what was happening. On taking the strain there was an explosion amidships with water shooting up in the air.
I ran into wheelhouse to find a right mess, radars, sounders all hanging from there mountings. Going down to engine room I met the second engineer, Ernie Wright, who told me he was hit with the blast and water was pouring in engine room. I got a Mayday call out and launched life rafts ready in case we had to abandon ship.
Water filled the engine room and started to fill crews accommodation. With no power and no pumps there was nothing we could do as she was settling stern first with her bow lifting out of water.
The crew got in life raft, all OK apart from two who had leg injuries, they were at winch when she went up. Then we sadly watched as she disappeared.
We were first spotted by a German yacht who came along side out of the fog. Then transferred to Gulf Fleet 11 rig boat and then to the Sunderland lifeboat who had a couple of cases Newcastle Brown Ales for the lads, bless there hearts.”

Note: Chief Engineer on deck watching the haul when the explosion occurred. When he got down the engine room every engine room plate had been lifted off its stringers and scattered around like confetti and there was water roaring in. He was of the opinion that if he hadn’t have gone on deck to watch the lads hauling he would probably have been killed by flying debris, if the blast hadn’t got him. He reckoned that there must have been a mine or some other ordnance in the trawl which detonated when it hit the bottom of the ship. 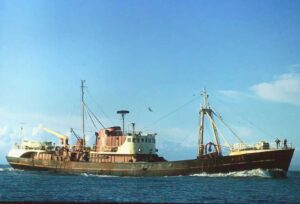 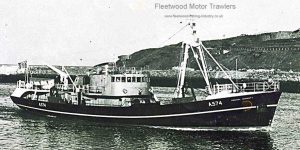 M.T. Admiral Burnett A574
Picture courtesy of The JJ Collection 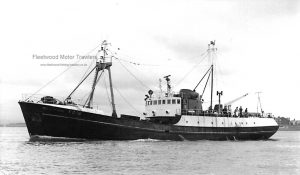 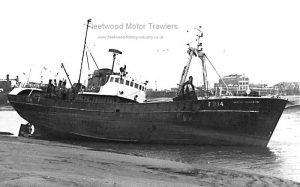 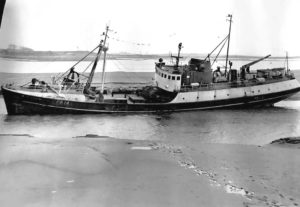 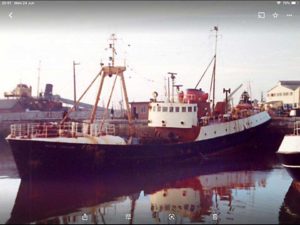 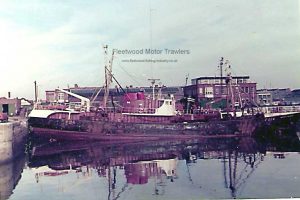